You are browsing documentation for a version of Kuma that is not the latest release.

Go here to browse the documentation for the latest version.

Set up a multi-zone deployment

This is a more advanced deployment mode for Kuma that allow us to support service meshes that are running on many zones, including hybrid deployments on both Kubernetes and VMs.

We can support multiple isolated service meshes thanks to Kuma’s multi-tenancy support, and workloads from both Kubernetes or any other supported Universal environment can participate in the Service Mesh across different regions, clouds, and datacenters while not compromising the ease of use and still allowing for end-to-end service connectivity.

When running in multi-zone mode, we introduce the notion of a global and remote control planes for Kuma:

In this deployment, a Kuma cluster is made of one global control plane and as many remote control planes as the number of zones that we want to support: 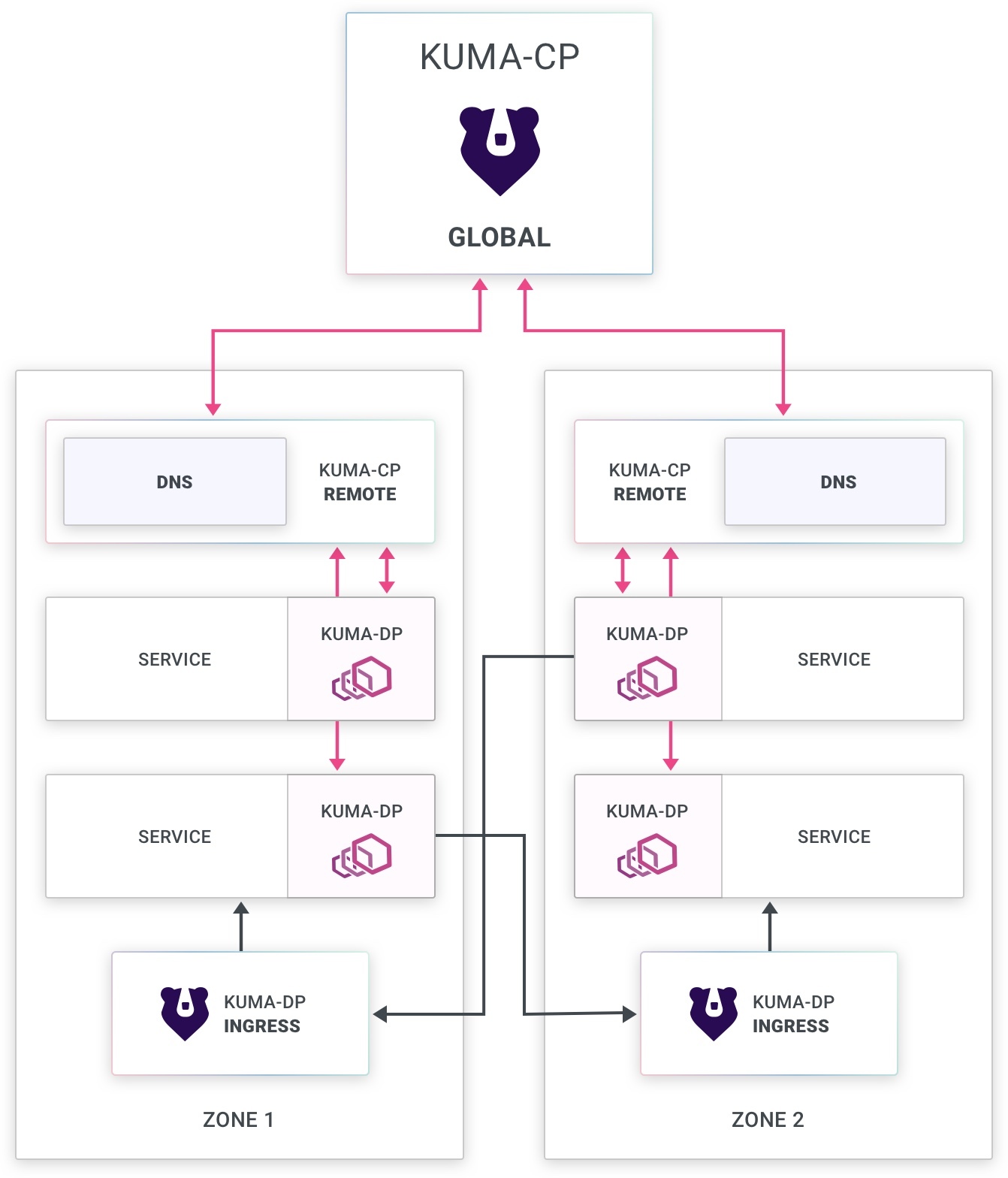 In a multi-zone deployment mode, services will be running on multiple platforms, clouds, or Kubernetes clusters (which are identified as zones in Kuma). While all of them will be part of a Kuma mesh by connecting their data plane proxies to the local remote control plane in the same zone, implementing service to service connectivity would be tricky since a source service may not know where a destination service is being hosted at (for instance, in another zone).

The global control plane and the remote control planes communicate with each other via xDS in order to synchronize the resources that are being created to configure Kuma, like policies.

For Kubernetes: The global control plane on Kubernetes must reside on its own Kubernetes cluster, in order to keep the CRDs separate from the ones that the remote control planes will create during the synchronization process.

In order to deploy Kuma in a multi-zone deployment, we must start a global and as many remote control planes as the number of zones that we want to support.

Install the global control plane by setting the controlPlane.mode value to global when installing the chart. This can be done on the command line, or in a provided file:

Kuma DNS installation supports several flavors of Core DNS and Kube DNS. We recommend checking the configuration of the Kubernetes cluster after deploying Kuma remote control plane to ensure everything is as expected.

To install the Remote Control plane we need to provide the following parameters:

Kuma DNS installation supports several flavors of Core DNS and Kube DNS. We recommend checking the configuration of the Kubernetes cluster after deploying Kuma remote control plane to ensure evrything is as expected.

To install DNS we need to use kumactl. It reads the state of the control plane therefore it could not be put into HELM. You can track the issue to put this into HELM here.

Run the kuma-cp in remote mode.

Where <zone-name> is the name of the zone matching one of the Zone resources to be created at the Global CP. <global-remote-sync-address> is the public address as obtained during the Global CP deployment step.

Add an ingress data plane proxy, so kuma-cp can expose its services for cross-zone communication. Typically, that data plane proxy would run on a dedicated host, so we will need the Remote CP address <kuma-cp-address> and pass it as --cp-address, when kuma-dp is started. Another important thing is to generate the data plane proxy token using the REST API or kumactl as described.

Adding more data plane proxies can be done locally by following the Use Kuma section in the installation page.

Additionally, if you deployed remote control plane with Ingress, it should be visible in the Ingress tab of the GUI. Cross-zone communication between services is only available if Ingress has a public address and public port. Note that on Kubernetes, Kuma automatically tries to pick up the public address and port. Depending on the LB implementation of your Kubernetes provider, you may need to wait a couple of minutes to receive the address.

Cross-zone communication between services is only possible when mTLS is enabled, because Ingress is routing connections using SNI. Make sure you enable mTLS and apply Traffic Permission.

To utilize the multi-zone Kuma deployment follow the steps below

To figure out the service names that we can use in the applications for cross-zone communication, we can look at the service tag in the deployed data plane proxies:

On Kubernetes, Kuma uses transparent proxy. In this mode, kuma-dp is listening on port 80 for all the virtual IPs that Kuma DNS assigns to services in the .mesh DNS zone. It also provides an RFC compatible DNS name where the underscores in the service are replaced by dots. Therefore, we have the following ways to consume a service from within the mesh:

The first method still works, but is limited to endpoints implemented within the same Kuma zone (i.e. the same Kubernetes cluster). The second and third options allow to consume a service that is distributed across the Kuma cluster (bound by the same global control plane). For example there can be an endpoint running in another Kuma zone in a different data-center.

Since most HTTP clients (such as curl) will default to port 80, the port can be omitted, like in the fourth and fifth options above.

In hybrid (Kubernetes and Universal) deployments, the service tag should be the same in both environments (e.g echo-server_echo-example_svc_1010)

If a multi-zone Universal control plane is used, the service tag has no such limitation.

And to consume the distributed service from a Universal deployment, where the application will use http://localhost:20012.

To delete a Zone we must first shut down the corresponding Kuma Remote CP instances. As long as the Remote CP is running this will not be possible, and Kuma will return a validation error like:

When the Remote CP is fully disconnected and shut down, then the Zone can be deleted. All corresponding resources (like Dataplane and DataplaneInsight) will be deleted automatically as well.

In order to disable routing traffic to a specific Zone, we can disable the Zone via the enabled field:

Changing this value to enabled: false will allow the user to exclude the zone’s Ingress from all other zones - and by doing so - preventing traffic from being able to enter the zone.

← Set up a standalone deployment Overview →